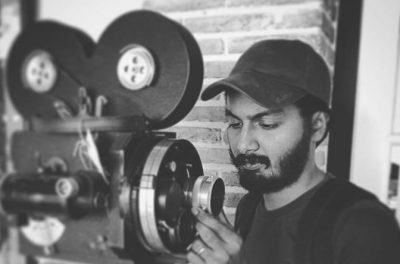 Artist in Residency: A work in progress  screening and talk. Cinematographer Anantha Krishnan, shares clips from  “Shadows of Gandhi, How Democracies Die” and discusses his artistic  process.

Over the years, what began as a work of fiction became a diary, and then, influenced by his conversations and travels as a photojournalist, an exploration of the problems that face his nation and both inform and threaten democracies around the world.

Part documentary, part diary, part guided journey,  Anantha sees his process as one “of writing down memory, political thoughts, and bending the visual material to preserve a freedom of expression in India and wherever democracy is alive.”

Bio
Anantha Krishnan involved in transcending cinematographic narratives. Worked as cinematographer for Tehelka music project and Magic lantern movies in New Delhi. He moved to Portugal to pursue the Doc Nomads Erasmus Mundus Joint Master Degree 2017-2020 (EMJMD) in Documentary Filmmaking delivered by a consortium of the University of Lusofona in Portugal, University of Theatre and Film Arts in Hungary and St. Lucas School of Arts in Belgium. Currently working as Camera trainee under different Belgian cinematographers.