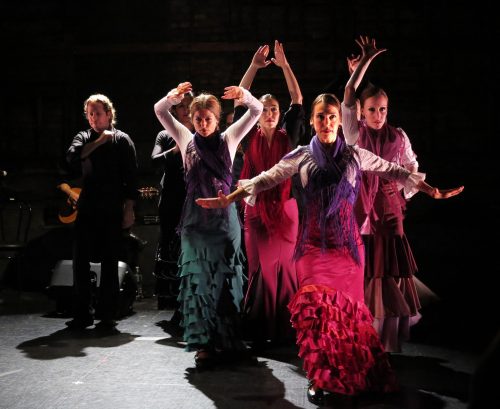 Featuring a cast of fierce (and female) flamenco dancers and musicians, “Nosotras Somos…” is an original Flamenco production created by artistic director, Rebeca Tomas.  The show will pay tribute to female empowerment and showcase choreographies that range from traditional Flamenco to original compositions set to voice recordings, spoken word, and a mixture of rhythms and sounds.  The project is supported, in large part, by Arts Westchester’s Arts Alive grant.

A Palo Seco is a New York based Flamenco Company that strives to develop a unique voice, employing their Flamenco expertise, while also taking into account the context in which they live.  Their work aims to expose people to an innovative way of looking at Flamenco, combining traditional techniques with a modern, metropolitan flare. Run by artistic director and choreographer, Rebeca Tomas, the company debuted its first production in May 2010 at Theatre 80 St. Marks (New York City). The production was described as “a feast for the eyes and the ears” (Linsday Miller, Theatre On-Line), and reviewed by several press sources, including the New York Times.  Jack Anderson, for the New York Theatre Wire, wrote, “Tomas is seeking to develop Flamenco in new ways.”  In addition to yearly engagements in New York City, the company has appeared throughout the U.S. at venues such as the Chicago Flamenco Festival, Eastman School of Music’s World Music Series, Jacob’s Pillow, the Rockefeller Brothers Fund Pocantico Center, SummerStage, and the New Victory Theater.

“A Palo Seco” is a phrase that refers to a bare-bones style of flamenco music, often consisting of singing or percussion alone.  This stripped-down aesthetic has become a central theme in artistic director Rebeca Tomas’ choreography, characterizing her biggest departures from tradition, while also rooting her work in the emotional rawness that lies at the heart of the art of Flamenco.  In support of her work with A Palo Seco, Tomas has received support from Arts Westchester, the Lower Manhattan Cultural Council, the Jerome Foundation, the Connecticut Office of the Arts, and she received a Choreography Fellowship by the New York Foundation for the Arts in 2013 and most recently in 2019.  https://www.apalosecoflamenco.com/

The Art of Mexico: A Rich Tapestry of Traditions