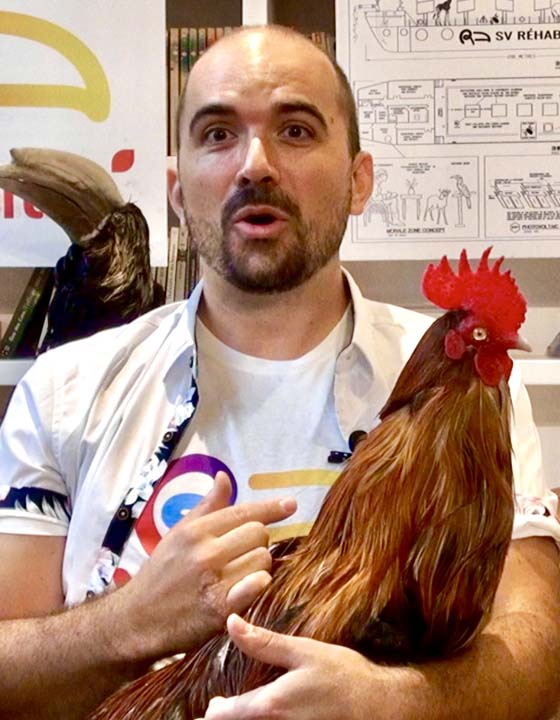 Join Keil Troisi for the performance of Creative Mischief: Doing Good by Being Bad
Keil Orion Troisi (of culture-jamming groups The Yes Men and The Fixers) explores trickster-activism techniques that combine comedy, creativity, and surprise to plague evildoers and amplify activist campaigns.

Artist: Keil Orion Troisi
Dates of Residency: May 2 – May 15

Residency Plan: Keil is scheming a mischief-activism performance that combines invisible theater, guerrilla filmmaking, and media-hacking. The plan has to remain secret for now, but thematically relates to the sordid histories of certain big institutions. He will spend his time in residency researching, writing, and drafting materials (scripts, websites, press releases, etc.).

Artist Bio:
Keil Orion Troisi uses mischievous multimedia performance and media-hacking to facilitate hope in dark times. For over a decade he has been a core member of culture-jamming group The Yes Men, and co-founded The Fixers, an international conspiracy to disrupt systems of power and fix kinks in the universe (or make them kinkier). He has taught in the Trickster Academy, and won a New York Foundation for the Arts Fellowship in Screenwriting-Playwriting (2019). He directed the corporate-horror movie Human Resources (2015), award-winning short Mono Generation (2017), and produced and co-wrote The Peace Pipeline, a MAP Funded performance opposing Line 3 that won Best Short at Dallas VideoFest, North Dakota Human Rights Fest, and Wolf Tree Film Fest. He helped stage an “Apartheid zombie” takeover, guerrilla-flyered for murderous food companies, showed off an invisible border wall to Trumpers, and most recently orchestrated a “grand guignol-esque” bloodbath in Paris. Keil’s work balances humor and horror to disrupt systems of power and the fabric of dominant culture, wielding trickery to create the sense of magic we need to reclaim agency from forces that would prefer us to remain passively boring.