Poetry Reading & Talk: An Interpretation of the Real: Poetry & Photography 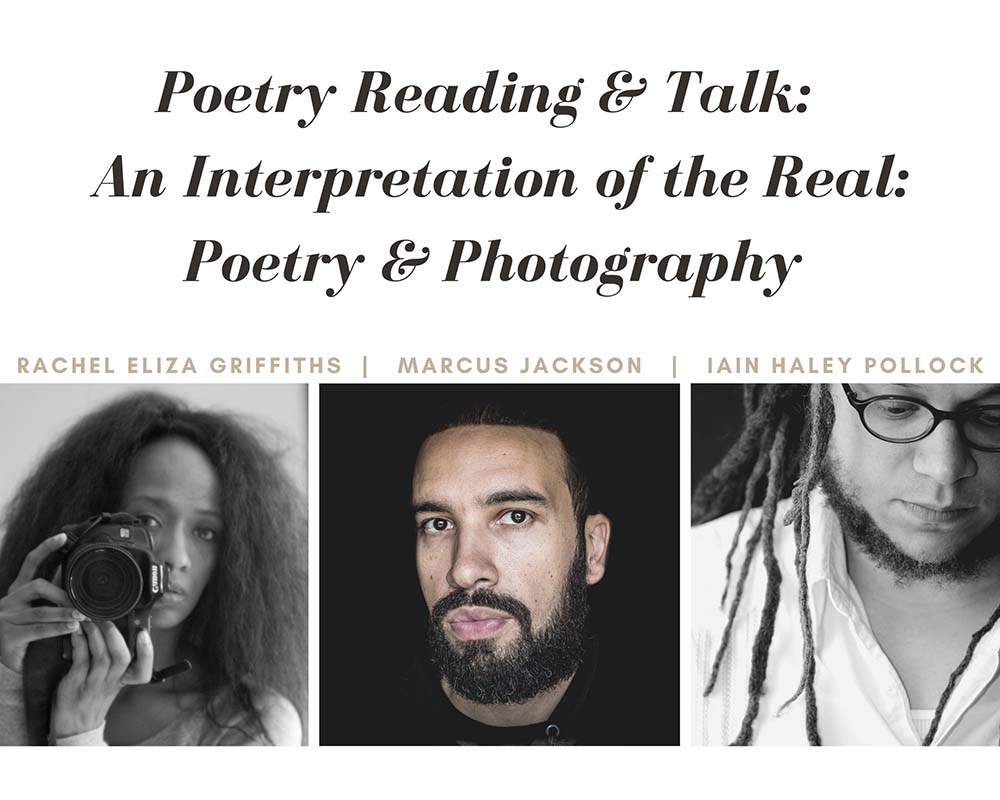 Poetry Reading & Talk: An Interpretation of the Real: Poetry & Photography
Register for Webinar

“Photography is the art of the image while the work of many poems is to render images from the raw material of language. Both forms can also seek to find the essence of a person, place, object, or experience through mimesis and distillation. In this session, Griffiths and Jackson, who are both practicing poets and photographers, will discuss the intersection of these two artforms—how they speak to one another, how they work against one another, how they veer away from one another. They will also discuss their approach to each form as well as their poetic and photographic influences. Following a 30-40 minute conversation moderated by poet Iain Haley Pollock and photographer David Flores, Griffiths and Jackson will each spend 20 minutes each reading their poems and presenting their photographs. After these presentations, the audience will have a chance to ask questions of Griffiths and Jackson. ”

Artist Bios:
Rachel Eliza Griffiths
Rachel Eliza Griffiths is a poet, visual artist, and novelist. Her hybrid collection of poetry and photography, Seeing the Body (W.W. Norton), was published in 2020. Other poetry collections by Griffiths include Lighting the Shadow (Four Way Books, 2015), The Requited Distance (Sheep Meadow Press, 2011), Mule & Pear (New Issues Poetry & Prose, 2011), and Miracle Arrhythmia (Willow Books, 2010). As a visual artist, Griffiths is the creator of Poets on Poetry (P.O.P), an intimate series of interviews, which gathers more than fifty contemporary poets together in conversation to discuss poetry in relation to individual human experience and culture. Her forthcoming debut novel, Promise, will be published by Random House. She lives in New York City.

Marcus Jackson
Marcus Jackson is a widely published photographer and writer who holds a Master of Fine Arts degree from New York University. Marcus specializes in portraiture shot on location with mostly natural or available light. His photographs capture the organic beauty and complexity of people and places. His poems have appeared in The American Poetry Review, The New Yorker, and The New York Times Magazine, among other publications. His chapbook, Rundown, was published by Aureole Press in 2009. His debut full-length collection of poems, entitled Neighborhood Register, was released in 2011, and his second book-length collection, Pardon My Heart, was published by TriQuarterly Books/Northwestern University Press in 2018. Marcus lives with his wife and daughter in Columbus, Ohio, and teaches in the MFA programs at Ohio State and Queens University of Charlotte.

Iain Haley Pollock
Iain Haley Pollock is the author of two poetry collections, Ghost, Like a Place (Alice James Books, 2018), which was nominated for an NAACP Image Award, and Spit Back a Boy (U. of Georgia Press, 2011), winner of the 2010 Cave Canem Poetry Prize. Individual poems have appeared in American Poetry Review, The Baffler, and The New York Times Magazine. Pollock serves as Chair of the English Department at Rye Country Day School and is a member of the poetry faculty at the Solstice MFA program of Pine Manor College. He also curates the Kitchen Table Series, a bi-monthly online poetry reading.