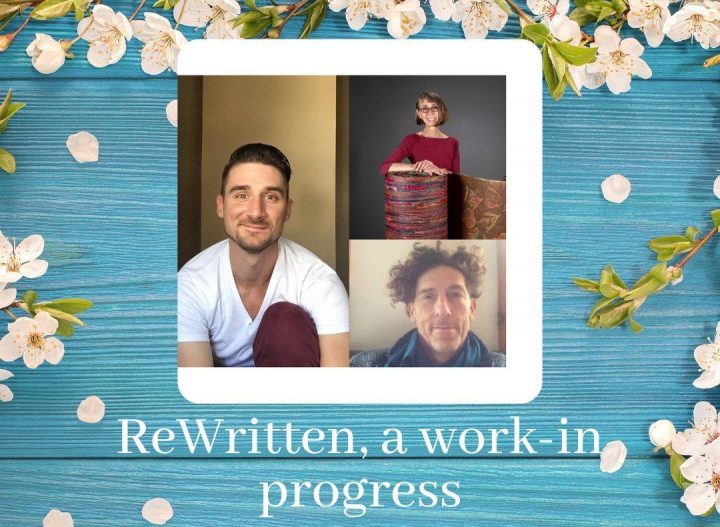 Join dancemakers Tom Truss and Matthew Cumbie and visual artist Diane Samuels for “ReWritten, a works-in-progress” showing that shares aspects of their performance and community engagement project. ReWritten uses the often silenced intimate relationship between Herman Melville and Nathaniel Hawthorne as a portal to reflect on friendship, writing, social morés, and notions of queerness. As part of the evening, you’ll be invited to share your ideas and feedback through a facilitated conversation to help inform and further shape the development of this work. A recording will be available online after the event for audiences to tune in virtually, so that they might continue connecting with a national network of artists, scholars and those interested in ReWritten.; so that they can meet new people and hear new ideas; and, so that they can ensure our full creative team that stretches from Texas to Maine is present.

Bios
Matthew Cumbie (he/him/his) is a collaborative dancemaker and artist educator living in Washington, DC. His work has been supported by the National Endowment for the Arts, the DC Commission for the Arts and Humanities, the Arcus Foundation, and the Somerville Arts Council. Originally from Houston, Texas, Matthew holds an MFA in dance from Texas Woman’s University and is currently a Visiting Assistant Professor at Colby College.
Artist’s social media:
Instagram: @pavelzoubakfineart, @makerbakershaker, @askyourgayuncle, @matthewhcumbie
Facebook: @ Tom Truss (facebook.com/tommytrussiii), @ Matthew Cumbie (facebook.com/matthewhcumbie)

Tom Truss (he/him/his) is a community-based artist, educator and performer. Truss has performed and/or shown his work at The Kennedy and Lincoln Centers, The Joyce, On the Boards, Jacob’s Pillow Dance Festival, Roundhouse Theatre, and The New Zealand Fringe, to name a few, as well as in rivers, used furniture stores, and fire escapes. He currently co-hosts Ask Your Gay Uncle, an advice podcast, with his gay nephew, and is devising a dance/theatre/puppet solo show called Behind The Tapestry.
Artist’s social media:
Instagram: @askyourgayuncle
Facebook: @ Tom Truss (facebook.com/tommytrussiii)

Diane Samuels (she/her) is a visual artist with both studio and public art practices. Samuels has received a Rockefeller Bellagio Residency, an American Academy in Jerusalem Fellowship and is co-founder of City of Asylum, providing sanctuary to writers in exile. She holds both a bachelor’s and master’s degree in fine arts from Carnegie Mellon University. Her permanent site-specific artworks include Luminous Manuscript (Center for Jewish History, New York) and Lines of Sight (Brown University), and The Alphabet Garden (Grafeneck, Germany).
Artist’s social media:
Instagram: @pavelzoubakfineart, @makerbakershaker