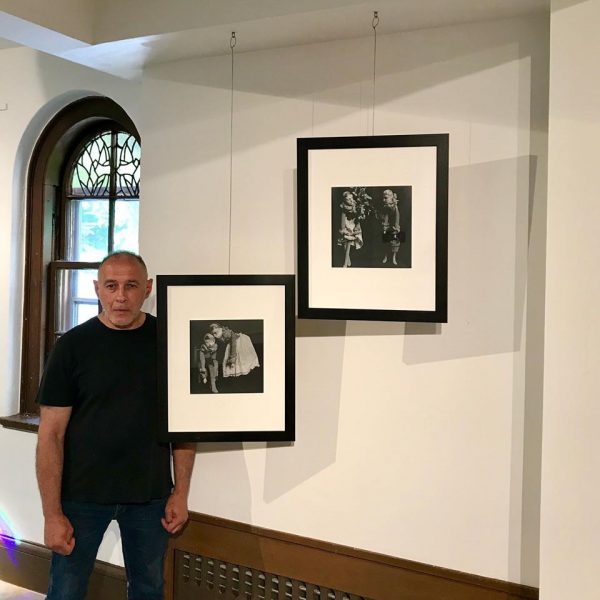 Artour Toulinov: an (online) exhibition at Bethany Arts Community
Exhibit on display Jun 20th – Aug 31st, 2020
Gallery open by appointment
Artwork may be purchased by contacting us at info@bethanyarts.org

Artour Toulinov I began to photograph exclusively in the studio in 1999, using a black backdrop, which serves as a little theater. People from all walks of life became my models and interacted with objects I’d find everywhere, but mostly at the flea market, in antique and thrift stores or on the street, in order to tell a story. The studio gave me the freedom to portray my emotional struggles and those of others in a deeper way. Looking back over my work, I realize the most persistent themes are isolation and loneliness, nostalgia, mortality, the struggle with ambition, the irrelevance of labor to success, and the process of immigration. In the beginning, I explored the meaning of my memories, – what I left behind in Russia and what I brought with me. But then the work became more about what I found to be true for me here in America, and even more about the emotional lives of the people who were my models.

I always come to the studio with an idea and never work spontaneously. The props I use have relevance to an idea or to the model. I find that by working with the same props and the same models, I am able to discover even deeper meaning in my initial ideas. The models and I gain greater comfort working together over time, and they are then able to reveal the beauty of the human mind.

I was inspired to work in this particular way by the icons that fascinated me growing up in Russia, and by the classical literature of my motherland. In this age of digital photography, I suppose my tools would be considered classical as well. I shoot only black and white film with a Hasselblad camera designed in 1948, and print the images in the darkroom the old fashioned way.

My greatest satisfaction comes when an image is able to elicit an emotional response or memory for the viewer, because I have delved deep into myself in making it, and we have found our common humanity.

Artour Toulinov was born between two rivers in Tuapse, Russia, a seaport on the Black Sea. From a young age, he was sculpting, painting and drawing. He graduated from Moscow State University with a degree in law, which he practiced until he immigrated to the United States in 1991. Although he was unable to practice law here, he did continue his work as a fitness trainer, not realizing then that he was training his eye for the photographic work he would make in the future with people from all walks of life.

He first picked up a camera in 1993, but it wasn’t until 1999 that photography became his passion and his work took a serious bent. He began working exclusively in the studio, using a black backdrop to create a small theater for the objects and people that would portray the memories he left behind in Russia, and those that he brought with him. His work has always been heavily influenced by his fascination with Russian icons and by the classical literature of his motherland, and so it was natural for him to create stories with his images, stories that evolved over the years to express emotions and experiences common to all. He shoots only black and white film with a Hasselblad camera designed in 1948, and prints the images himself in a refined silver gelatin format.

Toulinov’s work is in the permanent collection of the Brooklyn Museum, as well as in many private collections, and has been shown in galleries in New York City and Europe. After living and working in Manhattan for twenty-seven years, he now has made Philadelphia his home. arttoulinov.com

About Bethany Arts Community:
Founded in May of 2015 by David Lyons, Bethany Arts Community, Inc. aspires to be a leading center for arts and culture, where the many forms of art can be seen, learned, and produced. BAC aims to inspire sharing, connection, and collaboration in a culture designed for the benefit of the local community and beyond.”